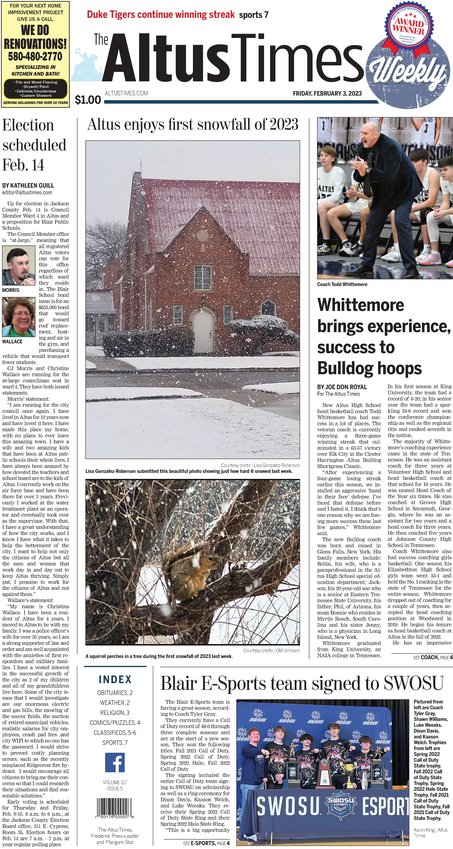 Smalts Furniture to close doors after a generation on the square 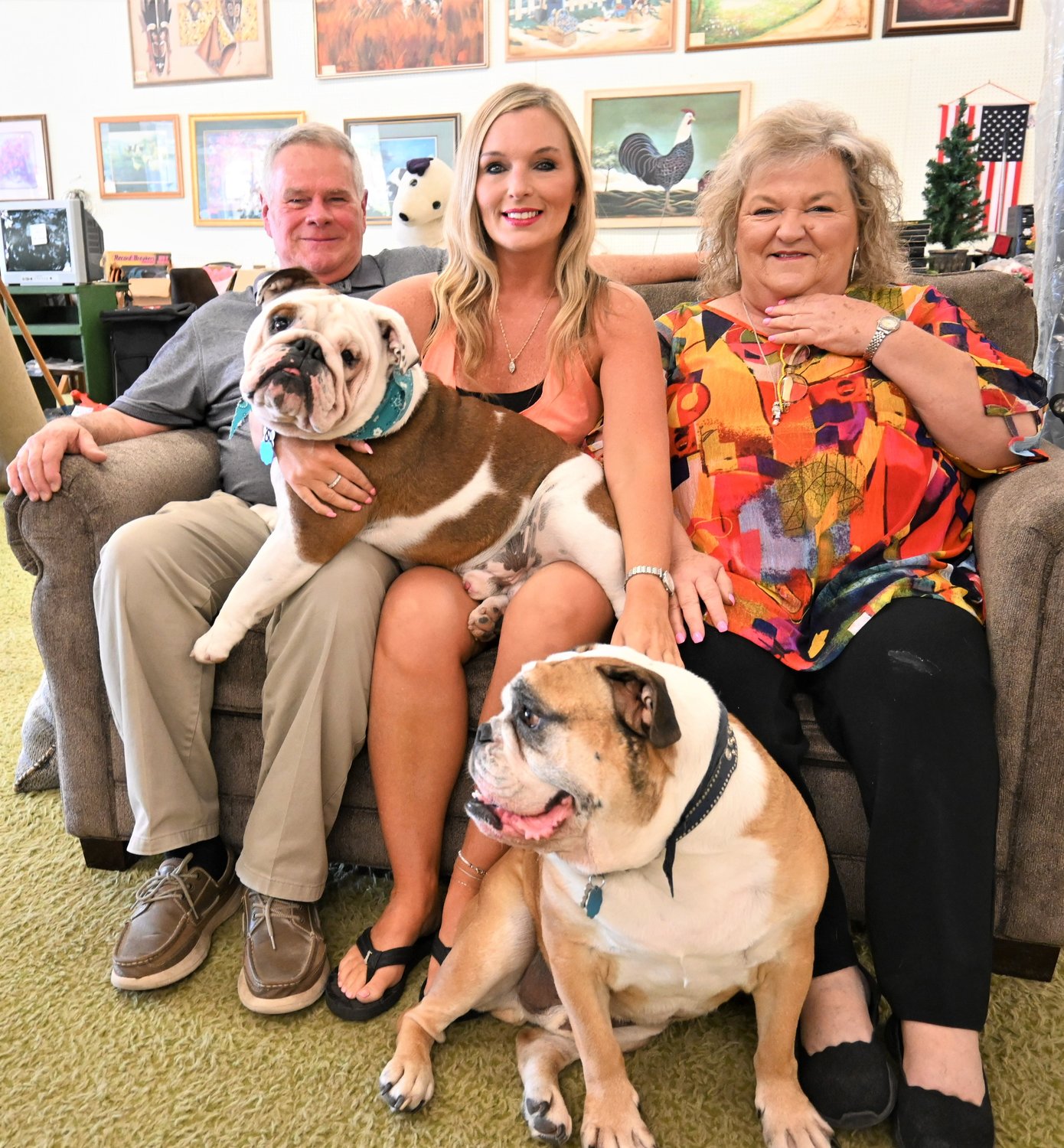 One of the last mom-and-pop furniture stores is closing its doors for business this month.

Smalts Furniture, in the historic building on the northwest corner of the courthouse square, will be gone by the end of the month.

A final auction for the remainder of the stock will be held Saturday, Aug. 21, beginning at 10 a.m.

Owners, Ron and Teresa Smalts, have put their heart into the business since they have owned it in 1988, a generation ago.

“We had discussed closing for a long time. When everything fell into place, we knew it was God’s pan,” said Teresa.

The building has been sold and the new owners have yet undisclosed plans for the historic property at 121 N. Hudson Street, on which construction started before statehood, in 1901.

The store suffered, as many small businesses across America, with Covid-19 problems in the supply chain. “We couldn’t get recliners for months,” said Teresa. “At one point, we were eight months out on delivery.

Once the couple made their decision in May, they simply stopped orders for new stock and canceled others. Gradually, the showroom became emptier over the summer.

The couple has no regrets. They put their life into the business and are ready to retire.

“I would like to take just about three weeks where I don’t have to do anything,” said Teresa. Ron said he plans on fishing.

Ron said that when he graduated from Tipton High School in 1969, he got his first new suit of clothes at Wilson’s Department Store, which was where the furniture store now is. Before Wilson’s, the establishment was Russell’s Department Store.

Ron’s first furniture retail experience was at Darby’s in Duke.

Ron joined the US Marine Corps and left Altus.

In 1971 he came back to Altus and enrolled in Altus Junior College. A chance encounter at the enrollment led to what both agree was love at first sight.

Teresa Masterson had moved to Altus from Rialto, CA, when her father was transferred to Altus Air Force Base and was new in town when she met Ron.

The next December the couple married, and the union has lasted almost 49 years.

In 1974, Wiginton Furniture Store opened at 121 N. Hudson Street. The business was owned by Ed and Peggy Wiginton. Ed had previously been a business partner with Ted Kincannon at Capri Furniture, before opening his own place.

Ron went to work for the store and has not changed his job location in 47 years.

Ed Wigington retired 14 years later and the Smaltses bought the business on Sept. 1, 1988.

The rest was history.

“People have asked us how we have been able to live and work together all these years. I guess it’s just true love,” said Ron.

“God gave us this business, and we honor Him by committing to never being open on Sunday for all these years,” said Ron.

Both of their children grew up in the store where both their parents worked, playing on the furniture and in the big boxes, and as they grew older, helping in the store.

Their daughter, Rhonda Smalts Evans, still takes an interest in the store and drops in every day.

Their son, the late Brad Smalts, a former US Marine, was tragically killed in an accident in 2010.

The couple remarked on the outpouring of love and support from the community in the time of their sorrow. “When tragedies happen in Altus, people lift you up,” said Teresa.

In the 1970’s and early 80’s, there were quite a few furniture stores in town. The Smaltses said that they and other furniture store owners never were cutthroat competitors. “We all got along and there was enough business to go around,” said Ron.

The corner where Smalts Furniture stands is a great vantage point to see everything on the square. Saturdays were the big shopping days back then, and Altus consumers were drawn out in the middle of the night for shopping bonanzas like Moonlight Madness and Midnight Madness. Shoppers would walk around the square in a counterclockwise motion, and whoever went against the flow of foot traffic had a hard time.

The store was also a good spot for unfolding disasters.

Teresa remembers May 11, 1982, when a tornado touched down in Altus on the east side of town and going on to cause extensive damage to Altus Air Force Base. “That storm went right over our store, and we could see it moving away. We were so lucky it didn’t touch down in the middle of downtown,” said Teresa.

Another big event happened on Nov. 16, 1988, when a fire broke out in cotton modules at a gin just a half mile away from Smalts Furniture. The fire tore through the south part of town, destroying 20 homes and businesses. The couple remembers the choking, thick smoke which blanketed downtown.

A calamity of a different kind happened to the store in 2000, when a city water main burst in the alley and flooded the basement. “I came in and saw water up to the next-to-the-top step from the basement. I could see the light on the basement ceiling, shining underwater.” All the furniture stored in the basement was lost to the flood. A Department of Corrections crew, lodged in a building on Broadway, helped clean up the extensive damage.

But life goes on, as does business.

One of the side businesses the Smalts expanded in the 1980’s was an RCA dealership. The couple took a camera in hand and went everywhere with it, filming school events, sports, weddings, and other gatherings.

Members of the First Baptist Church of Altus, the Smaltses started filming Sunday services live, creating a TV ministry with Milton Redeker. It was a project close to their hearts, and they continued for 25 years before passing the torch.

For many years, until 2004, Ed Wiginton would help watch over the store when the couple traveled. Ron, who served on the Altus Board of Education, traveled to out-of-state conventions for the National School Board Association.

After Ed passed away, there has been no one to run the store if the couple wanted to leave. They have not had a vacation in 17 years, and they are ready!

“We are going to miss the store, but we are ready. Altus has been very good to us,” said Teresa.

Murder defendant sentenced by jury to life behind bars

“The little engine that could”: AAFB nominated for AF-level award