Bank opened in the midst of the Great Depression

The iconic NBC building in the 1930’s, at the northeast corner of N. Hudson and W. Commerce. The former Altus City Hall is pictured on the left.
All photos courtesy of NBC 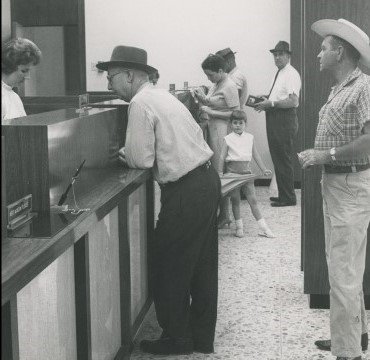 Tellers and customers engage in commerce at the window. 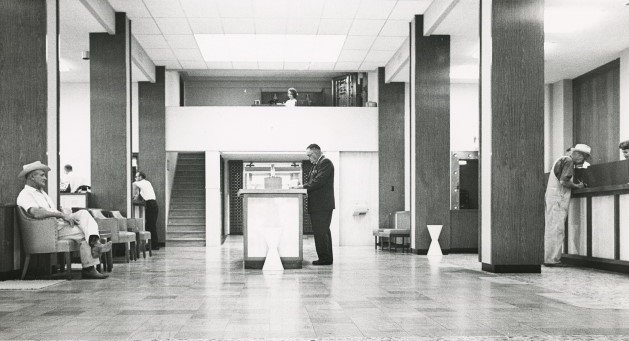 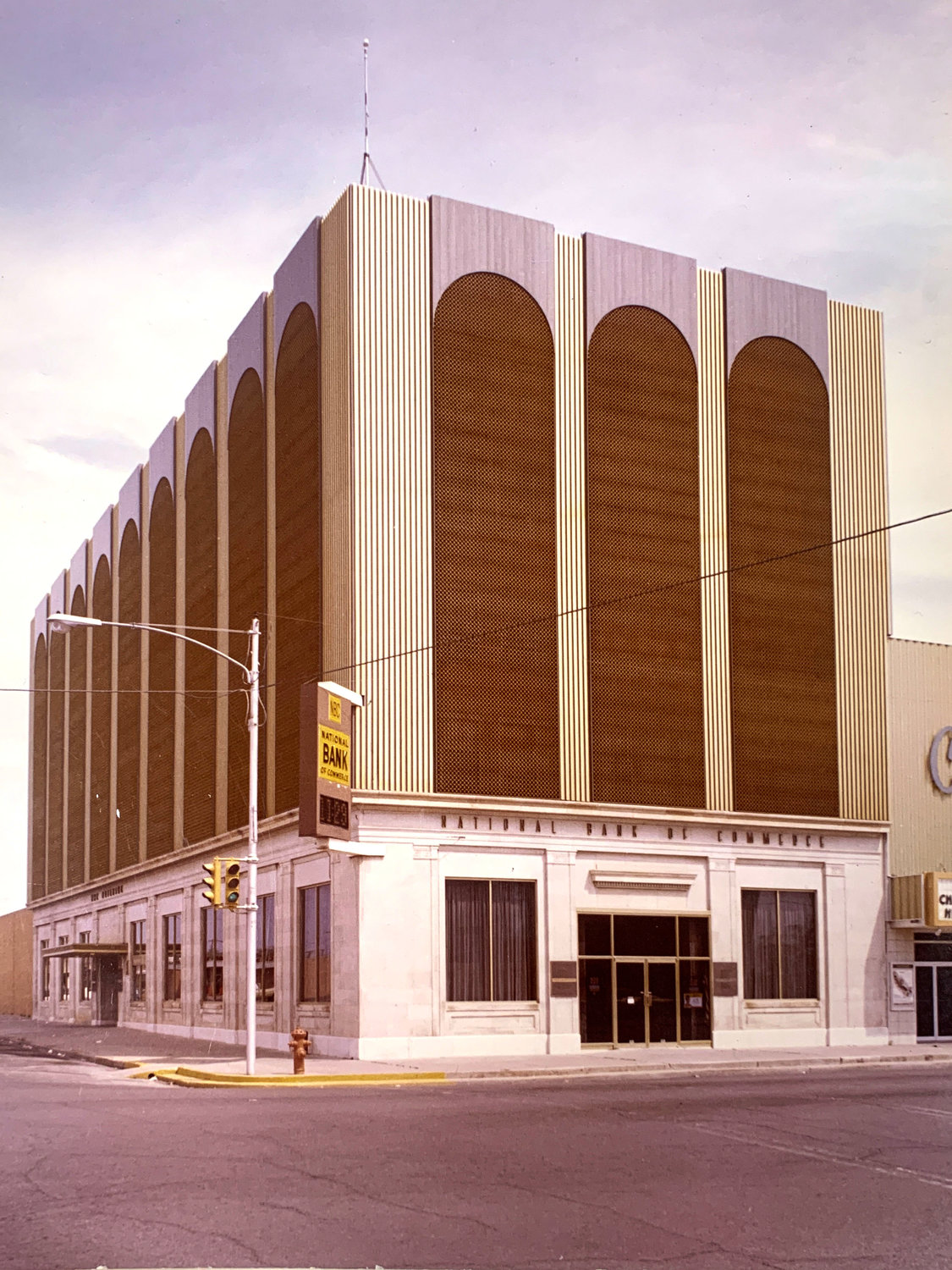 The exterior of the bank at 123 W. Commerce in one of its architectural phases in the mid-20th Century. The veneer covered large window air conditioning units and were removed in 1986. 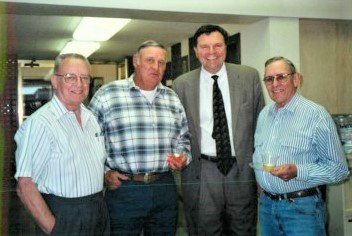 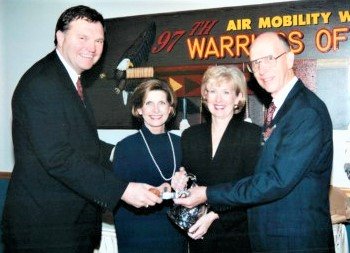 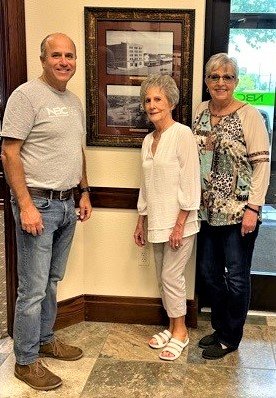 Current and past employees of NBC have been reconnecting this week: left, Jeff Greenlee, Linda Holland Copeland and Debbie Davis.
Previous Next
Posted Thursday, August 19, 2021 2:42 pm

NBC Oklahoma is celebrating its 90th anniversary this month, in August 2021.

In 1931, W.B. Gover started the National Bank of Commerce in Altus, OK, in the middle of the Great Depression.

Boxes of photos depicting decades of happy employees and bank remodeling projects through the years only tell part of NBC’s story, but they do reflect the bank’s 90 years of community involvement and taking care of customers.

The handwritten bank ledgers and typewritten letters from the bank’s early days have given way to modern banking using the latest technology, but NBC has never wavered in its commitment to its motto of being “People You Can Bank On,” said Chairman Ken Fergeson.

“Helping others – that’s exactly what we do. We help them start a business. We help them buy a home. We help them plant a crop,” Fergeson said. “It’s like the heartbeat of the town. If you don’t have a bank in your town that is local that is willing to pitch in, then your town is not going to prosper.”

NBC is a nearly $800-million bank that has offices in Oklahoma City, Enid, Kingfisher and Altus. It is a member of FDIC. Fergeson acquired the bank in Altus in 1985 and continued to expand it while keeping its focus on developing personal relationships with its customers.

“We are a community bank that knows our customers, that knows their needs and wants and are willing to work with them to give them a fast answer and we have done that for years and will continue. To me that’s important. People don’t want to be left hanging,” Fergeson said.

“We have a tremendous investment in the community, not only in our five-story building in downtown Altus, but in the people, both our employees and our customers,” said Jeff Greenlee, president of NBC Altus Community.

Greenlee notes that cooperation with Altus Air Force Base (AAFB), a major factor in the area, is important to the bank. “We help out a variety of businesses, as well as a number of non-profit organizations in the area,” said Greenlee.

As the bank has grown, so has its ongoing support of its communities. In 2019 the bank matched employees fundraising efforts to donate more than $104,000 to The Children’s Center Rehabilitation Hospital in Bethany. In 2019 and 2020, NBC gave each employee $100 to give away to help someone else during the holidays.

Employees give their time as individuals to nonprofits and often play key roles as volunteers for community events, such as Main Street Altus’ Rock-N-Rumble Car Show; the Cork and Canvas auction in Oklahoma City for Positive Tomorrows, a school for homeless children; an Enid Chili Cook-Off benefiting the United Way; or Kingfisher’s Winter Nights light display. The bank also provides ongoing support for the Center of Family Love in Okarche, among others.

The bank also has an art gallery, the Wigwam Gallery in Altus, which demonstrates the bank’s and Fergeson’s longtime support of the arts in Oklahoma and improving people’s quality of life through art. The bank each year commissions an artist to do an original work as part of its NBC Artist Series, handing out prints, posters and postcards of it. NBC also has commissioned large-scale public works of art.

“I’ve always loved public art, which is free for anyone to enjoy and serves as a landmark for a community,” Fergeson has said. “Such art gives a place an identity and residents a sense of pride.”

The longevity of NBC employees reflects a strong workplace culture that serves its customers well. In addition to Fergeson’s tenure, CEO H.K. Hatcher and Chief Operating Officer Leigh-Anne Taylor have been with the bank, then known as Capital National Bank in Oklahoma City, since 1990, and Jerry Krittenbrink, chief financial officer, since 1988. Many others have been with the bank 10, 15, 20 years or longer.

Hatcher said the bank has always fostered a strong and positive culture that prioritizes doing the right thing over making a profit, taking care of customers and making sound financial decisions.

“At NBC we genuinely strive to live our values in the way we treat our employees and customers and put others’ needs ahead of our own. We have been a strong bank in good times and bad, and we will continue to be here for our people long into the future,” Hatcher said.