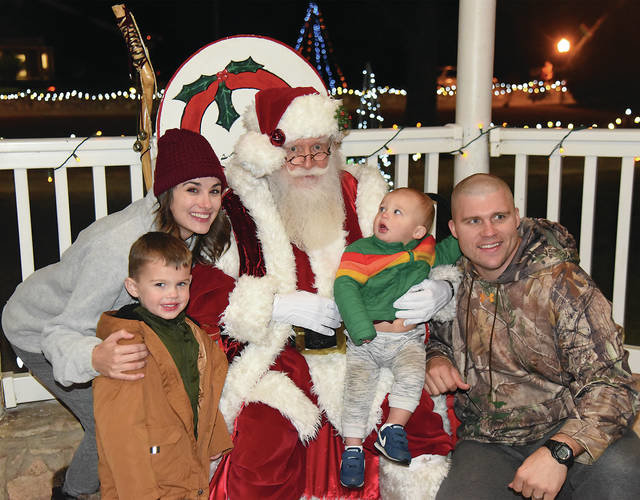 Carrie and Justin Dunn were first in line Saturday with Luke, 3, and Liam, 1, to get their family photo with Santa Claus. Santa has agreed to fly in for weekends through Dec. 21.
Posted Tuesday, November 26, 2019 11:15 am
By Rick Carpenter
rick@altustimes.com

NORTH POLE — Santa Claus has agreed to come to Altus on Thursdays, Fridays and Saturdays through Dec. 21 to visit with children and get their wishes for Christmas, The Altus Times has confirmed.

Santa arrived Saturday evening at dusk and was driven to the Altus City Park, at the junction of Broadway and Park Avenue, by the Altus Fire and Rescue Department. The City of Altus Parks and Recreation lights up the park with thousands of lights and displays each year in celebration of Christmas, and Santa agrees to participate.

Santa stores his sleigh and reindeer, including red-nosed Rudolph, at an undisclosed location so they can eat and take rest before their next flight. Santa asks that you not disturb the reindeer while they rest.

Santa will appear at the park gazebo on Thursdays, Fridays and Saturdays at dusk until 9 p.m. Meanwhile, the park will be lighted each night through Christmas. The walkways are also lighted so you can follow sidewalks to different site locations. The gazebo is lighted and has Christmas music playing near the center of the park and is easy to find.

In an exclusive interview with Santa, he told The Altus Times that the park is one of his favorite stops because it’s outdoors when many of his daytime visits are inside shopping centers. “It’s nice to get outdoors to get fresh air, especially because of the warm clothing I wear to stay warm during flights,” he said.

Santa also agreed to come to Altus on Dec. 17 to call children through the annual Rotary Santa Claus Connection. Parents can fill out a form provided by Rotarians that includes some background information to help Santa remember the children’s names, what he brought them last year, their pets’ names, whether they have an elf on the shelf in their homes and other information. The form also sets a preferred time to call — such as 6 to 7 p.m., 7 to 8 p.m. or 8 to 9 p.m. — so that Santa knows the children will be home waiting for the call.

Members of the Rotary Club of Altus collect the forms and serve as Santa’s helpers to set up the calls for Santa that night from the Red River Credit Union. The Altus Times office, 218 W. Commerce, has forms available for the public to fill out and return. There is no charge for the Santa Connection, but the Rotary club appreciates any donations that help the organization meet its annual goals.