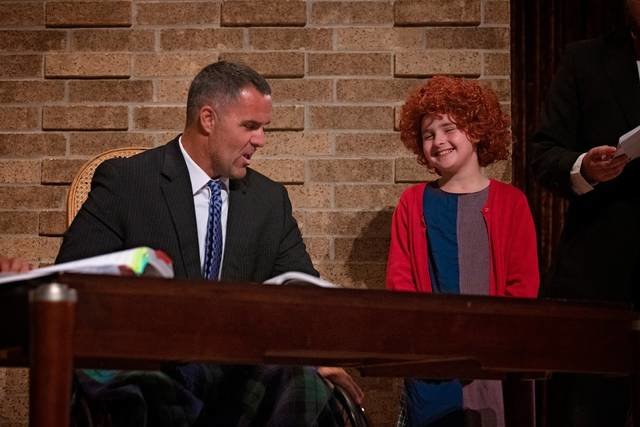 Friends of WOSC Performing Arts re-introduced musical theatre to Altus with a production of Annie July 30 – Aug. 1. Actors and actresses came from far and wide to audition for the musical Annie in June in Altus. Their hard work culminated in a weekend full of great shows.

Annie, the original Broadway production, opened in 1977 and ran for nearly six years, setting a record for the Alvin Theatre (now the Neil Simon Theatre). The show won seven Tony Awards, including the Tony Award for Best Musical. The musical’s songs “Tomorrow” and “It’s the Hard Knock Life” are among its most popular musical numbers.

Annie is based on the popular Harold Gray comic strip Little Orphan Annie. Set during the Great Depression, Annie, portrayed by Cassie Magrath of Lawton, and the other orphans are forced to work their fingers to the bone to “make this dump shine like the top of the Chrysler Building.”

Annie is eventually asked to come stay with Oliver Warbucks, the billionaire, for Christmas. Warbucks was played by Zach Perry of Hobart. Warbucks wants to adopt Annie, but Annie insists she has parents who are looking for her, so they go on a radio show with Bert Healy, played by Daniel Johnson of Altus. Warbucks offers $50,000 dollars to anyone who can prove they are Annie’s parents.

Thousands of people try to scam Warbucks out of the $50,000, including Miss Hannigan, the head of the orphanage, played by Becky Ross of Hobart. Miss Hannigan’s brother, Rooster, played by Carson Guthrie of Weatherford, and his girlfriend Lily, played by Blair Barnett Foley of Arapaho, connived with Miss Hannigan to get the $50,000 by pretending to be Annie’s parents.

Eventually, it’s discovered that Annie’s parents are dead, and Miss Hannigan, Rooster, and Lily are arrested.

This show was well-cast. From the very beginning, when Magrath’s Annie begins singing “Maybe,” you know you were in for a great show. Magrath was an entertaining and adorable Annie. She performed well and the audience clearly loved her. Magrath’s solo musical numbers included “Maybe,” and “Tomorrow,” but she also performed in several other numbers, including “Hard-Knock Life” and “I Don’t Need Anything but You.” She has the makings of a great stage vocalist and actress and I look forward to seeing what she does in the future.

The orphans were extremely entertaining. They performed the choreography during musical numbers like champions. My favorite was “You’re Never Fully Dressed Without a Smile.” The choreography included tap dancing and if you didn’t know most of these kids didn’t have dance experience, you never would have known from this performance. The audience shared my enthusiasm for this number, judging by the reactions of those inside the full theatre.

The orphans were played by:

Other standout performances included Miss Hannigan, Rooster, and Lily. Ross was a great choice for Miss Hannigan. She was hilarious and kept the audience laughing every time she was on stage. However, the best performance of the show was Miss Hannigan, Rooster (Guthrie), and Lily (Foley) performing “Easy Street.” The choreography was great, and they performed it seemingly with ease. It’s no easy feat performing choreography while singing but these three did it beautifully.

It’s said that there are no small parts, only small actors. Well, Daniel Johnson proved that even so-called “small” parts can become big parts with the right actor. Johnson played radio personality Bert Healy and he was one of my favorite performers of the show. He was funny and outgoing. He also sings very well as he demonstrated with “You’re Never Fully Dressed Without a Smile.”

No show is complete without a great team of producers, set and costume designers, and choreographers. Director Julie K. Barnett, Music Director Kimberly Duffy Duerksen, and Choreographer Leah Wall, did an outstanding job bringing this production to life.